A New Space to Represent the South

The Museum of Art in Birmingham unveiled Third Space, a contemporary art exhibit a collection primarily owned by the museum, this past month.

According to the museum’s website, the exhibition borrows Homi Bhaba’s term ‘third space,’ which he defines as a space that “challenges our sense of the historical identity of culture as a homogenizing, unifying force, authenticated by the originary past, kept alive in the national tradition of the People.”

Wassan Al-Khudhairi, the Hugh Kaul Curator of Modern and Contemporary Art, detailed the entire exhibit to reflect what she collectively called the Global South.

“The process is organic. It requires looking at the work and researching the piece, each step going hand-in-hand,” said Al-Khudhairi. “I was interested in thinking how contemporary art is global and how we are all connected.”

She said the exhibition portrays the American South and the Global South’s post colonial history and civil war past in a horizontal vision, to examine what remains over time.

Through Al-Khudhairi’s research, four sections emerged from what she was doing over the Global South and the American South. 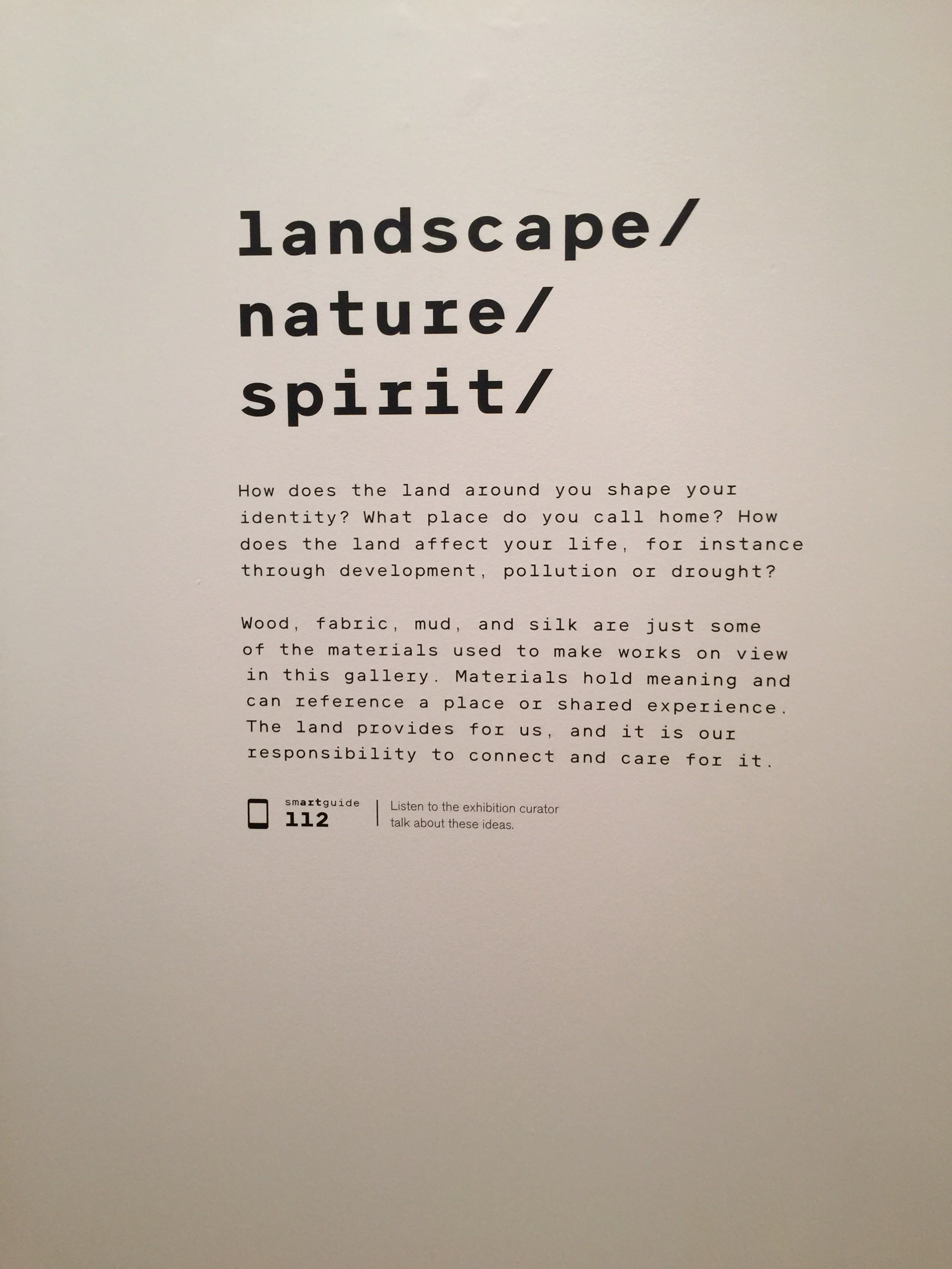 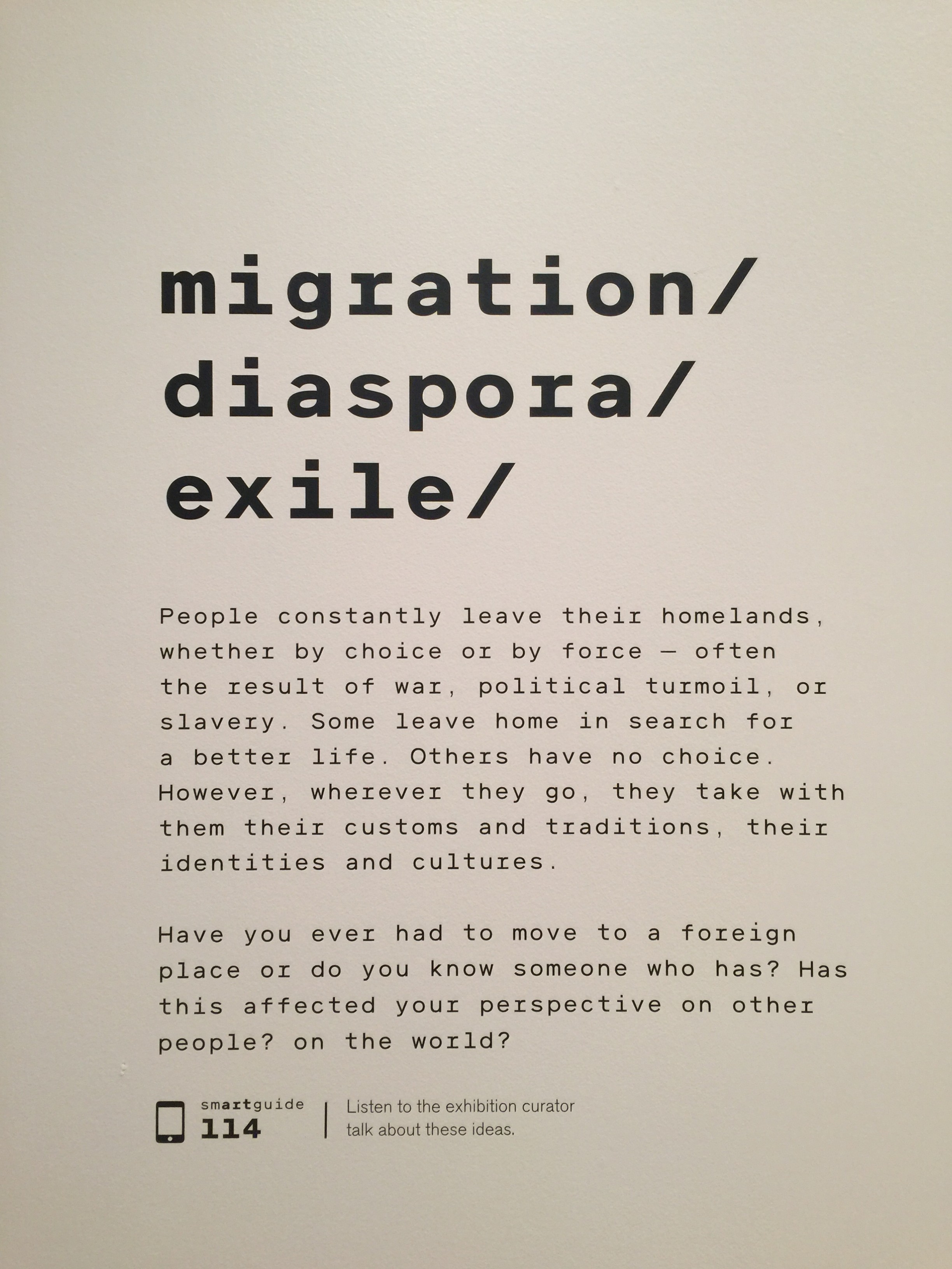 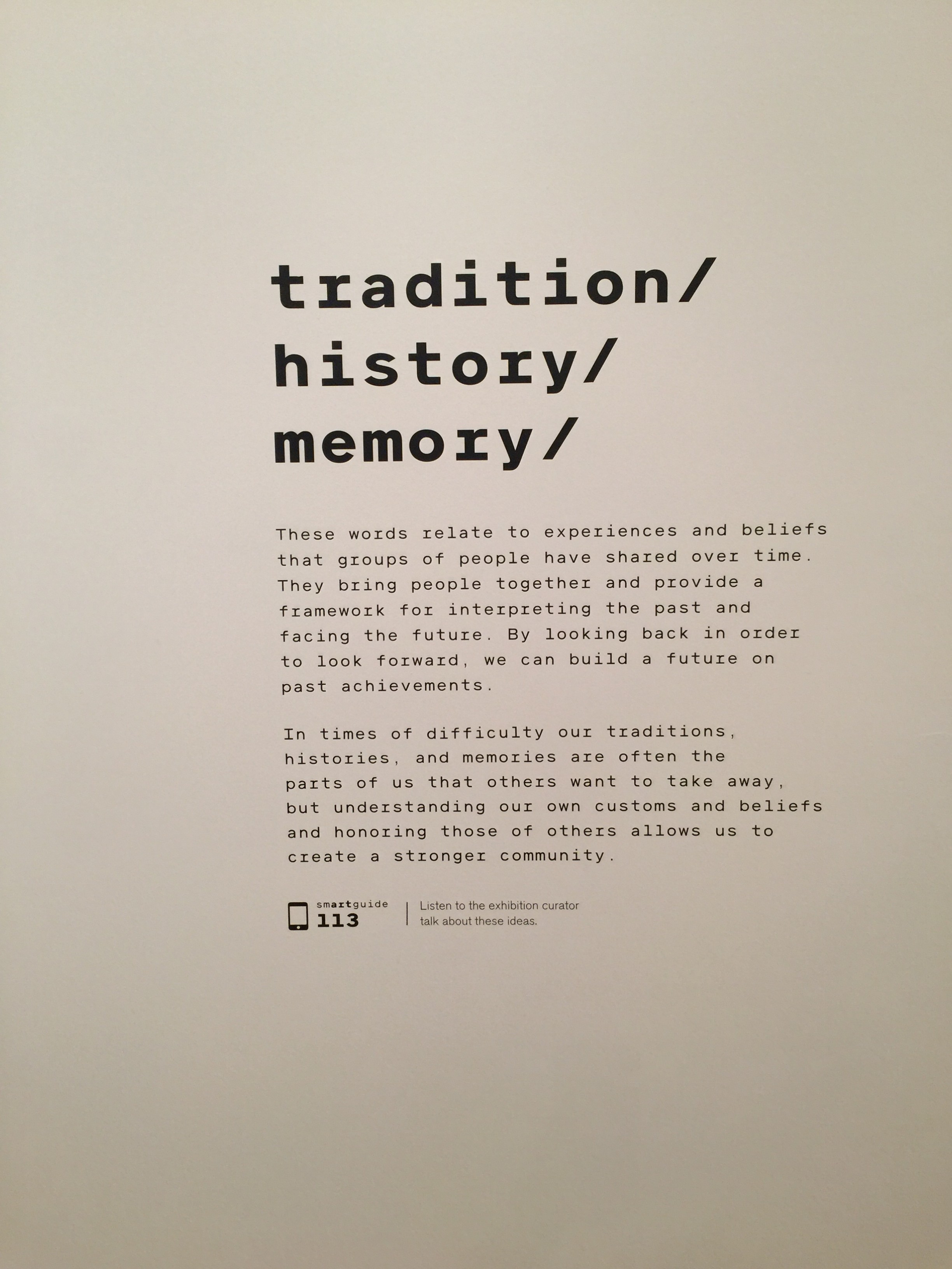 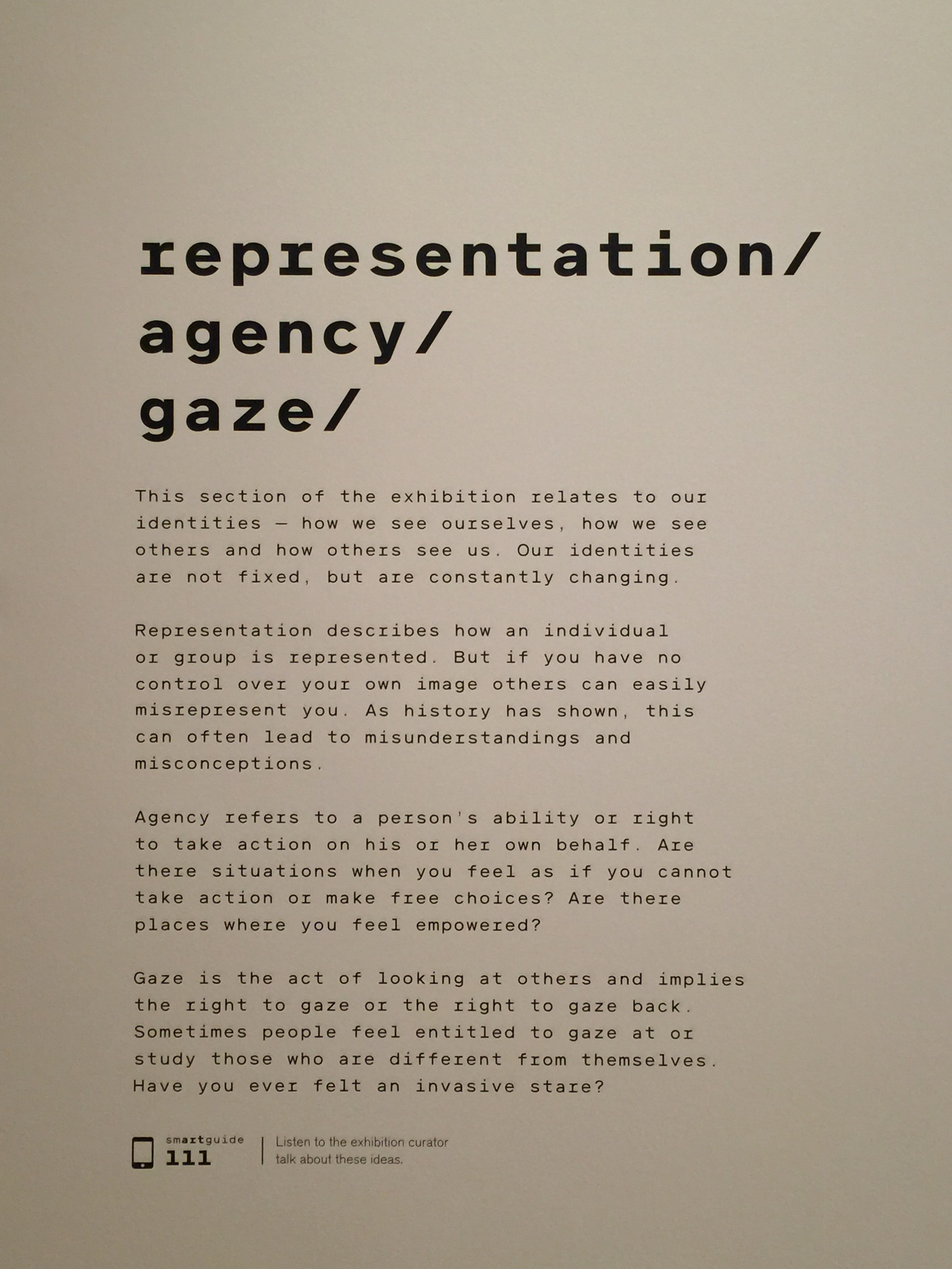 Each of the ideas helps connect the audience with the art in a different way, Al-Khudhairi said. 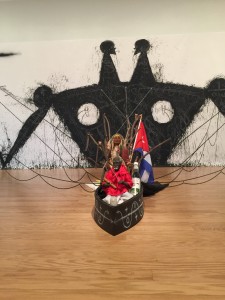 José Bedia, a Cuban-American artist who spent several years studying a combination of Afro-Cuban and Native American spirituality, has the largest piece on display in the exhibition.

“The piece features in the exhibition because it cuts across the room,” Al-Khudhairi said. “He presents the idea of migration and movement in the community from Cuba through a boat, the literal movement and also a metaphor for spiritual growth movement in his religion.”

He presents the idea of a multiple identity through the image of two heads looking back at each other, but also the possibility that it is just one person, said Al-Khudhairi.

The interpretation of the work is left up to the viewer. 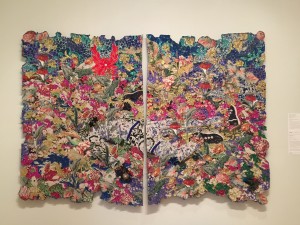 Ebony G. Patterson, creator of the Dead Treez series, has a piece of art called, “Among the weeds, plants, and peacock feathers” on display at the exhibit.

The smartguide said that the tapestries in this series depict images of murder victims. This brutality is under-reported in Jamaica it said and that people in the lower socioeconomic ladder are impacted by the violence due to poverty and insufficient resources in their region.

“She is really interested in Jamaican culture,” Al-Khudhairi said. “Once you look into the piece you notice the shoes, body and the death in the picture.”

Patterson seeks to display the violence to the black male body, Al-Khudhairi said. Her purpose is to desensitize what social media has done to us. Invisibility to brutality has become a problem and her artwork pushes you to see the visible and invisible, she said.

The pieces tell a story, she said, that portrays the constant movement of people, which seeks to provoke the audience to think about the past and how it shapes the future.

Al-Khudhairi said she wanted to look at the collection and consider how the exhibit affected Birmingham. She took into consideration how the works in the collection may have a different connotation here in the South, versus somewhere else. 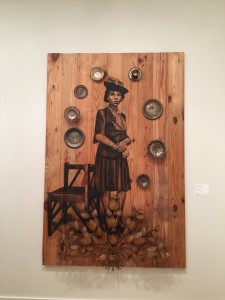 Whitfield Lovell, an artist best known for portraits of anonymous African Americans from between the Emancipation Proclamation and the Civil Rights Movement, noted in the guide, created a personalized artwork that is displayed in the exhibit.

“This artwork is on loan from a couple in Birmingham,” Al-Khudhairi said. “He, in his own language, recreates photos on wood panels and creates a persona for each, except this one because he got to know who she was.”

The portrait is of a woman’s mother and the decoration that surrounds her mother’s image contributes to the symbolism of the art.

Al-Khudhairi said that she looked to tell a story through all the pieces for the visitor and how factors like identity, history and memory of the past help define the future.

The idea was to relate global ideas to local ideas as a parallel aspect, as the viewer compares the past to the present,  Al-Khudhairi said.

“A number of artworks make a reference to civil rights in the way that it had a global aspect and how it affected the world all around,” Al-Khudhairi said. “The world saw that and it started a chain reaction.”

According to Al-Khudhairi, people from the community are recorded on the smart guides to share interpretations about the artwork and how it spoke to them.

“We wanted to see what people thought about the exhibition,” said Al-Khudhairi. “No one is wrong in his or her interpretation and you are in charge of what you see in the work.”

Mollie Everitt, an art teacher at Advent Episcopal, volunteers at the museum on the weekends.

“I think what stands out is how the pieces engage people in so many levels,” said Everitt. “There are such a variety of materials and sizes in a way that the pieces interact with the space of the viewer.”

A distinct aspect of the exhibition is that most of the pieces are owned by the museum, Everitt said.

Everitt said that the exhibit is organized thematically and all the themes tie into a larger overall theme of the Global South.

“It’s really interesting how the curator has laid out the work and set up the different rooms and spaces to have different feels to connect the different themes,” Everitt said.

Third Space has a smart guide that is available to go with you on the tour enable with great commentary, videos and a lot of information about the artist and the artwork, Everitt said.

She said there are Ipads that can be checked out for the exhibit or people can choose to get the app on their phone.

“It’s a unique set up because a lot of the works on paper are shifted out at different periods during the two year run of the show,” Everitt said. “So the exhibit will always feel fresh and new, even for visitors that come back multiple times.”

The exhibition will be on display until June of 2019.