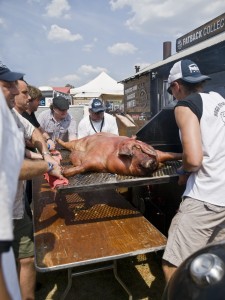 Their brisket pairs well with mashed potatoes, creamy macaroni and cheese and their just-right coleslaw. Their cheesy biscuits greet you at the door and come paired with sweet honey butter that creates the constantly sought after sweet-and-salty combination on your taste buds.

A cold sweet tea is essential to wash down the plate of a whole or half chicken and whatever trimmings you choose to fill your plate. You can find their biscuit mix in your local Publix supermarket and their rubs and sauces are up for sale in all of their locations.

According to Alexis Tarassoli who is a local store marketer at the Tuscaloosa location, Jim ‘N Nick’s has been in Tuscaloosa for five years. However, their presence has been here much longer. Having originally started in Birmingham in 1985, Jim ‘N Nick’s used to have a huge catering business in Tuscaloosa before their store opened around Mother’s Day in 2012.

Currently there are 38 stores total, but Jim ‘N Nick’s has plans to expand. They are currently planning on opening stores in three new locations mostly concentrated in the Southeastern region of the United States.

Barbeque is a Southern tradition, so Jim ‘N Nick’s fits in just right in Tuscaloosa.

Jim ‘N Nick’s was founded by two Southern men with a passion for BBQ. Jim Pihakis and his son, Nick, opened the first Jim ‘N Nick’s with the intention of serving fresh, mouth-watering BBQ to the Birmingham area. Once their first location took off, they expanded throughout the Southeast and even branched out to Colorado.

According to AL.com, Jim ‘N Nick’s does not have one freezer or microwave in their restaurants–the food is always prepared fresh.

According to Tarassoli, the atmosphere at Jim ‘N Nick’s is very friendly and accepting:

“Obviously, I was addicted to the food before I started working here, but my favorite thing about the company, which a lot of people don’t know, is on all of our business cards no one has a title because they want all of us to think we’re at a level playing field. The CCO has come to this location on gameday before and he will run a load of dishes before he heads out. Nobody thought they were too good for their position and they never think they’re too good to do a simple job like running dishes.”

Aside from freshness, Jim ‘N Nick’s provides its customers with some unexpected favorites as well. Every Tuesday, the restaurant has their ‘Taco Tuesdays’ specials. This has gone mostly unknown by Jim ‘N Nick’s eaters. These tacos come one a plate with two trimmings and your choice of pulled pork, chicken, beer or catfish tacos.

However, the highlight of course is the cheesy biscuits. We got Nick, or Diddy as those who know him refer to him, on the phone and asked how these biscuits got their start.

He explained that Jim ‘N Nick’s started by serving plain white bread, as most BBQ places do. The white bread soon evolved into biscuits, but they felt this was still too similar to what other BBQ restaurants were serving and they wanted to be different. That’s when cheese was added to the mix, and thus the cheese biscuit was born.

For students, Jim ‘N Nick’s has made themselves very accessible. They have various deals on the popular food discount app called “Hooked,” they just started to work with the delivery service Waitr and have worked with Crimson2go for about a year with much success.

“I normally don’t like chain BBQ restaurants, but I actually really like Jim ‘N Nick’s. It’s the perfect place for Sunday lunch after church and their cheese biscuits alone are enough to make you go back,” said Nelson Legette, a student at the University of Alabama.

Most of their catering is done on gamedays and for UA student and on-campus events as well. According to Tarassoli, last week they fed two fraternities, one sorority, Bill Battle’s farewell BBQ and the welcome party for new Athletic Director, Greg Byrne.

Aside from their downtown location, you can find Jim ‘N Nick’s at their food truck. The menu on the truck is limited, but all of their favorites are available. They also vend out of tents on gameday and will be vending during the Birmingham Corporate Challenge.

The biggest takeaway, according to Tarassoli, is that Jim ‘N Nick’s is more than just BBQ food:

“The biggest stipulation is the fact that since it’s a BBQ restaurant that’s all the food we have and I always have to tell people ‘you can hate BBQ and still love Jim ‘N Nick’s.’ I am not a huge pork fan, nor am I a fan of BBQ sauce or anything like that, and I still love Jim ‘N Nick’s food. We have really good chicken tenders and really good fish, there’s so many different things on the menu.”

If you are in Tuscaloosa, Birmingham or anywhere in the Southeast, Jim ‘N Nick’s is a rustic-feeling BBQ place with warm cheesy biscuits, tender smoked brisket and 32 years of BBQ experience under their belt. They’re a local restaurant you can count on for friendly service and mouthwatering home-style southern cooking.