The new food truck on the University of Alabama’s campus offers fresh roasted coffee to students and the community. 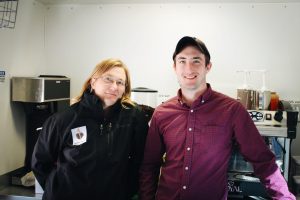 Kate Hartmann, left, and Andrew Hill, right, pose in their coffee truck on a Tuesday morning.

Joyful Java, a Tuscaloosa-based coffee truck, has joined the
University of Alabama’s food truck schedule this spring alongside the Local Roots food truck. The mobile coffee shop offers a curated menu of coffee and espresso options.

Kate Hartmann, the owner of Joyful Java, opened the truck this past November with her two sons Tyler and Andrew Hill. The family
relocated to Tuscaloosa when Andrew’s girlfriend began graduate school at UA.

Hartmann saw the growing college town as an opportunity to get her coffee business off the ground.

Joyful Java’s coffee quickly made its mark on the city when the truck spent the holiday season parked along the Tinsel Trail, a holiday program on the Riverwalk organized by Tuscaloosa’s One Place.

“We had people that would run by, then they’d come back and kind of hang out, then they’d order something, then they’d start walking back and we would hang our heads out the window because it’s that first sip reaction, like ‘Whoa,’ and that’s great,” Hartmann said.

Now, Joyful Java is trying to find its place on the University of Alabama campus, but it has had its challenges. Hartmann said the truck has tried many different locations around campus, but the food truck map is still being worked out by the university. Joyful Java is also in the process of getting registered to accept Bama Cash and Dining Dollars, but the approval process has been long.

Hartmann’s son, Andrew Hill, said it’s also a challenge being a mobile coffee shop in a town that is unfamiliar with food trucks.

“I’ve gotten a lot of people that come up and say ‘Oh, it’s great to see a food truck’ because where they’re from there’s such a mix of people from different areas,” Hill said. “Some of them are used to seeing them, but then
people who have lived here all their lives, they don’t know much about them.”

Regardless of these challenges, students like Jennifer Smith are excited that the truck is on campus.

“It’s good coffee,” Smith said. “I would say it’s better than Starbucks, and up there with Java City.”

Hartmann and her sons said they are in the business to make good coffee and bring joy to others.

“I agonized over a name for the truck, and I actually settled on this because the word ‘joyful’ not only means
being happy, but it also means making other people happy,” Hartmann said. “I’m in it for the fun; I wouldn’t be here if it wasn’t fun.”