The Man Who Gave Saturdays a Voice: Inside the Broadcasting World of Gary Danielson

A deeper look into the life of Gary Danielson, a man who has set the bar high for all sports analysts to come.

It’s Saturday in the South, I am on the press box level of a college football stadium. One hour is on the game clock and thousands of fans have begun filling the stadium. The same CBS blazer, perfectly pressed, is slipped onto the back of the chair. His hair perfectly coiffed under his headset, his voice being soothed with a cup of hot tea. As he goes over the notes that he so meticulously thought out, one last time. The man who I’ve watched and learned from for the past four years. The voice of the best game of the week in SEC college football who millions of viewers turn on the television every Saturday afternoon to hear. The legendary color analyst, Gary Danielson.

What most people don’t know is, “it’s the creative people who sleep with a notebook on their nightstand,” Danielson says. Every note of his is perfectly printed and highlighted in different colors on a note card, for both teams every week. They are neatly printed in pen, with exquisite thought going into the order and detail of what is written. Whether he’s sitting around reading an article at home, or watching a movie with his grandkids, he likes to be prepared with his notebook or binder for when ideas pop into his head. He is constantly working, thinking, brainstorming.

For Danielson, the broadcast world was not always exactly the dream finish line. He didn’t attend college for sports broadcast, though he was quite the athlete. He earned his bachelor’s and master’s degree at Purdue University, where he played quarterback for the Boilermakers. He lived out a 13-year NFL career dream where he played for the Detroit Lions and Cleveland Browns. He knew NFL contracts are short, and he couldn’t just lay off in the off season and play games if he wanted to have a family. Danielson had to make a decision not just for himself, but for his future.

Danielson remembers his first on-air experience was an Easter telethon. The scheduled reporter called in sick and he was asked to step up. He recalls doing 20 hours of live TV, and says that it felt like “a natural fit.” This was the turning point in Danielson’s life that made him realize he could make a career for himself, and for his family, in television broadcast. He says, “Transitioning to broadcasting came natural to me because as a quarterback, you’re always asked to be the guy who talks. As a dad, you’re always depended on.”

Most people outside of the sports television world thinks that it’s all fun and games. While it is a lot of fun, it isn’t just games. For Danielson, Friday nights are for relaxing and game preparation. It’s a calming, mind-gathering night in the hotel room ordering dinner and going over notes. You will never see him at a fancy restaurant downtown, or having drinks at a bar. Danielson’s personal opinion on game preparation? “Never stop preparing,” he says, “the philosophy of it is twofold. Sure, all the prepared stuff is important, but what you’re trying to do with the viewer is take in what appears to be complex to the average person, and show the simplicity to it.”

Every Friday afternoon in the fall, Danielson packs up his briefcase from the broadcast booth on the press box level of the stadium and takes the elevator down to the SEC bus where his face is pictured on the side for the production meeting. He comes full of ideas for each individual producer, and delivers a perfect analysis of what to watch for during the game, pointers, and ideas. Everything done by producers, to graphics, to tape, to the field, Danielson has a part of it. The most admirable thing about him is, he isn’t only a role model in the booth, but a friend to anyone who crosses paths with him. Broadcast partner and Sideline Reporter Allie LaForce says Danielson motivates her to be the best that she can be. “I now try to think creatively and different than the ‘norm’ about my approach because of him.”

Danielson spends the majority of his week watching games and putting together stats and depth charts of who will be seen in the game. Friday’s are for interviews of coaches and players, which help to put in the last few details before broadcast. A lot of Danielson’s broadcasting comes with trust. He says, “You just have to trust yourself, your work over the years, your background, and your current knowledge.” His job isn’t teachable, he is able to bring natural humor and amazement to the game broadcast. Colleague and Sideline Producer Kalil Cage adds that Danielson’s uniqueness in his broadcast is the simplicity of his commentary. She says, “He has a rare ability to explain the game of football to even the least knowledgeable viewer and yet still entertain the most ardent fanatics.” 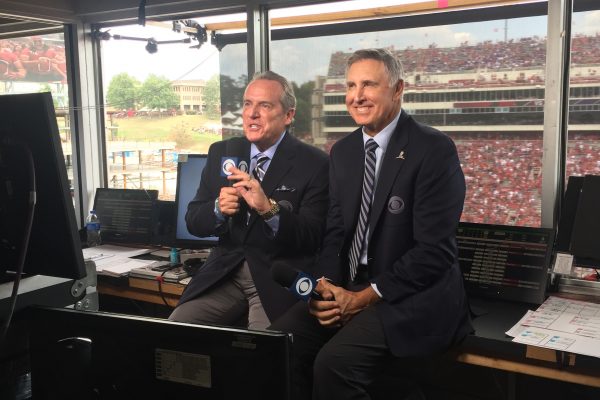 Kalil Cage put it best, “I understand the game of football because I grew up listening to Gary.”