American artist Robert Kushner presents his exhibition at Sarah Moody Gallery of Art on the University of Alabama campus. 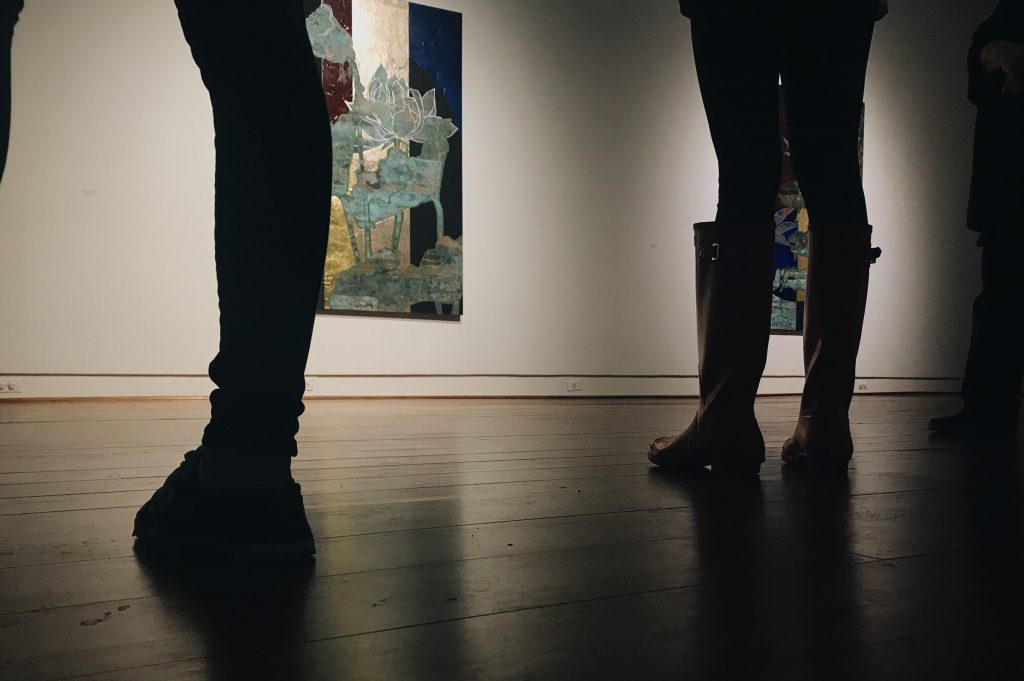 TUSCALOOSA, Ala. –– American painter Robert Kushner visited the University of Alabama on Wednesday to guide students, faculty, and community members on a walkthrough of his feature exhibition — Tracery and Plane: Paintings by Robert Kushner — in the Sarah Moody Gallery of Art.

The exhibit highlights several of Kushner’s works throughout his career which show his focus on natural forms and innovative gilding techniques.

Kushner is known as one of the initial forces in an artistic movement known as Pattern and Decoration. He said that it was never his goal to be a part of a movement, but that he and his fellow artist friends were looking to create a form of art that had little precedent in the United States.

“What we loved were things that were complex, things that didn’t upset you, but by looking at then you could gain a kind of visual excitement and tranquility,” Kushner said.
From this interest in complexity, Kushner created his own unique style that includes flower and plant imagery along with metallic elements that he gilds directly onto the paintings.
“The flower is a metaphor for just about anything,” Kushner said. “There’s beauty, there’s transience; the flower is the sexual organ of a plant, so there’s a kind of an eros. If you look at it that way, the sensuality that you might see in a nude can be in a flower.”

Kushner sees his life as well as the human condition in plants. He describes his paintings of flowers as representative of moments in his life or overall life wisdom.

“There’s tremendous reward and tenderness, and there are a lot of thorns,” Kushner said in reference to one of his works on display at the Sarah Moody Gallery.

University of Alabama art student Anna Pollard said his focus on flowers and plants as subjects is what really draws her attention to Kushner’s work.

“I really like his subject matter, for one because I enjoy painting flowers myself,” Pollard said, “But also, the way he balances structure with the fluidity.”

Kushner uses many different techniques to create fluidity in his work, one of which is spontaneity.

“I like to have a lot of accidents, but under control,” Kushner said.

Kushner’s visit to the university and his accompanying lecture are part of an ongoing program sponsored by the Department of Art and Art History. Several artists are invited each semester to talk to students and the community about their art and the art-making process.

Department Chair Jason Guynes said that the Visiting Artist and Scholar Lecture Series is extremely beneficial to students in the college.

“It brings the international art world to Tuscaloosa, which is our job,” Guynes said, “Kushner is a big name, but we have a lot of big names come, it happens a lot.”

Tracery and Plane: Paintings by Robert Kushner will be on display in the Sarah Moody Gallery of Art until March 23. Kushner said he is happy to share his work because his goal in creating art is to offer something good to the world.

“It’s not what I’m trying to say, but what am I trying to give?” Kushner said.