Millennials encourage a modern throwback trend in the music world

Physical media is making a comeback as millennials buy into the notion that retro is the new black. 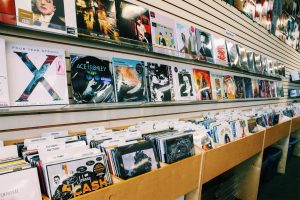 TUSCALOOSA – After years of increasing technology and a decline in analog media, a modern throwback trend has emerged in the music world.
Jason Patton, owner of Oz Music in Tuscaloosa, said that millennials’ yearning to consume throwback music has a lot to do with the resurgence of vinyl.
“Fifteen- to 30-year-olds are just infatuated with vinyl right now, and a lot of it is them pulling their parents’ collections out of the attic and listening to it and hearing music from 40 or 50 years ago and kind of yearning for that nostalgia,” Patton said. “I think that does kind of influence taste in a certain way too.”
Davis Wright, a 21-year-old student at the University of Alabama, said that he developed an appreciation for vinyl through his grandparents, but began buying his own records for the collection potential they offer.
“I think there’s something special about walking into a record store or a thrift store and finding something unique and something you may have never gave a shot if it was just buried on a music app,” Wright said.
Millennials’ discovery of older music through vinyl has prompted the creation of a modern genre that incorporates retro influences with modern production values. Over the past eight years, Alabama has had a growing influence on the old school music scene. Alabama is the birthplace of several “modern throwback” bands, including Alabama Shakes, St. Paul and the Broken Bones, and Wray. These bands all have millennials at their lead, yet they create vintage soul and rock music that is reflective of a different era.
John Mock, who works at Oz Music, said that the turn back to retro musical styles and forms is due to the fact that technology was too much, too quick.
“Good music is good music, but there’s a lot of people out there that have no business making music,” Mock said. “It’s been a lot of fluff –– an awful lot of it –– and if you look at anything, that’s always the reaction; it’s like ‘We’ve done this, now let’s go back to this.’”
In the trend back to retro media, the numbers agree. Daniel Drinkard, owner of Seasick Records in Birmingham, has seen vinyl sales increase consistently since he opened the store in 2013.
“Every month we have bigger sales than not necessarily the month before, but every year we’re growing, and more people are buying physical media –– primarily vinyl,” Drinkard said.
Likewise, Patton has watched Oz Music’s vinyl sales skyrocket since 2015 when he purchased the business, and he attributes the increase to the 15- to 30-year-old “digital crowd,” who are the predominant vinyl buyers at Oz.
According to Nielsen Music, the leading source of music data and insights, 2017 was the 12th straight year of growth of vinyl album sales. Vinyl LP sales reached 14.3 million in 2017, a 9 percent increase from 2016 sales. Nearly half of vinyl buyers are under the age of 25, according to MusicWatch, a music industry analysis company.
“They didn’t know physical product until they got into vinyl,” Patton said. “It’s refreshing that people in that age bracket are appreciating physical music.”
Mock said that the authenticity of physical media will always attract consumers for the unique experience it can offer.
“There’s something organic about music in its very nature,” Mock said. “People like to touch it; they like to look at the art put into it.”
Although there has been a significant increase in vinyl sales, digital music streaming has also been on the rise, increasing by over 20 percent in 2017 alone, according to Nielsen Music. Drinkard said that although demand for digital music remains, physical media is finding its relevancy and niche in the modern world.
“I don’t think it’s ever going to get back to the heyday of physical media,” Drinkard said. “But it’s going back that way a little bit better than it has been.”
Patton said he believes the experience vinyl LPs offer will continue to captivate consumers, keeping the media format relevant.
“You wouldn’t go to your friend’s and be like ‘Hey I just downloaded the new Bob Dylan CD,’ but you would absolutely say ‘Hey I just bought this new Bob Dylan record, do you want to come over and listen to it?” Patton said. “It’s more of a communal experience and keeps you engaged with the music.”