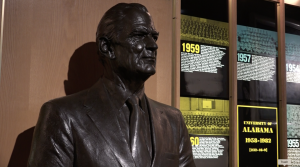 Tuscaloosa is widely known for its Southern hospitality, food and football. Families travel thousands of miles for the barbeque and a stroll down the Walk of Champions in front of Bryant Denny Stadium. Many even plan their vacation time at work around a trip to Tuscaloosa to see the University of Alabama and all it has to offer. One of the sites they see is a statue of Paul ‘Bear’ Bryant, frequently rated the best head coach in the history of college football

Paul William Bryant, better known as Coach Bear Bryant, became a legend during his time as the head coach of the Crimson Tide. He had 323 career wins, most of any head coach at the time. He lead the Tide to six national championships, and 13 conference championships. During his 38 years as a head coach, Bryant earned numerous awards, records and honors for his achievements. In a way, he helped end the segregation that was prevalent on this Southern campus in the 60s and 70s. He started a legacy that every coach who would follow in his footsteps afterwards would have to live up to, including Nick Saban, who is tied with Bryant with six national championships.

Ken Gaddy, director of the Paul Bryant Museum, says that Coach Bryant’s life is the “All American Story.” Growing up poor in Arkansas, his father was disabled and his mother ran a truck farm to get by. They milked cows and grew vegetables, and then went into town to sell it. Bryant, his mother, and his siblings worked tirelessly to provide for the family.

When the time came to go to college, Bryant knew that his only way in was football. He used  a football scholarship to the University of Alabama as a learning opportunity. He went on to become an assistant coach at Alabama and Vanderbilt, before enlisting in the U.S Navy.  After many head coaching jobs, Bryant returned to Alabama as head coach and athletic director. Tuscaloosa has not been the same since.

Bryant hosted a live weekly television show called “The Bear Bryant Show” that served as a weekly recap of the Crimson Tide’s previous day’s game. Gaddy says one of his favorite stories comes from some of the assistant coaches that worked with Bryant.

“The other coaches were always very nervous about what he was going to say on live television about the game film,” Gaddy said, smiling.

Bryant left an impact on the University of Alabama and the Crimson Tide football program. Because of him, the Crimson Tide holds a long list of achievements and honors. Every coach to follow him will have a tough legacy to live up to- so far Coach Saban is doing just fine.